In the game of Banished you are leading a group of settlers who have been banished from their home. It is up to you to organize your workers to clear land, gather resources, and to construct a new settlement to live in. 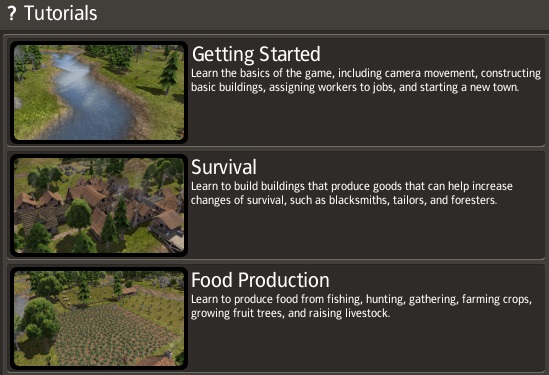 Banished has an excellent set of Tutorials that give new players a great starting point.

It is recommended to complete all four tutorials before starting out on a new game.

This tutorial will guide you through the most basic of functions including:

The third tutorial is focused on the various methods of producing food for the settlement such as farming, planting orchards, hunting wild game, and raising domesticated animals.

The final tutorial teaches the player the basics of trade, an important aspect of playing Banished.

Once you have completed all the tutorials, you can return to the main menu and start a new game.

There are 3 difficulty levels in Banished.

At the start of a fresh game, it is key to gain access to a few basic resources and buildings within your first year. Resources can get used up quickly, depending on the difficulty level, and your citizens may begin to die from lack of food or from the cold.

The first building you construct should be a source of food. The food that you begin with is used up quickly and can lead to mass starvation. The best food buildings are as follows:

Housing for your first few families should almost certainly be built prior to the first winter to avoid losing citizens to hypothermia.